Miss Gore-Booth was re-elected to represent the Council on the Education Association.  Mrs. Redfords resignation was accepted with regret, and a  ? was decided to ask her to become a Vice President.

It was reported that the shop assistants had discontinued renting the office for their meetings.

Miss Bulley had seen Mr Thos. Johnson re Fancy Box makers and ascertained that the firm of S.& J.  Watts did not make their own boxes.  Tailoresses and shirt makers are employed at this firm but the present time was inopportune for organising, as stocktaking was going on.

It was reported that two meetings had been held for the Tailoresses and that the Society was increasing its membership, twenty one new members having been enrolled during the last month.  It was proposed to hold fortnightly meetings at the office for organising purposes.

The Capmakers had been holding weekly meetings at the office, new  literature has been printed and distributed.

Mrs. Dickenson had been in communication with one of the Folders and Sewers at Newton le Willows, but arrangements for organising had been postponed at the wish of those concerned.

There had been a difficulty at Bradshaws.  The men, considering the existence of their Union was threatened, had come out and the employers had offered some of the girls extra work to do without any advance of wages.  The matter was at present being discussed by the Folders and Sewers Union with a view to the possibility of the Society taking action.  It was reported that the Annual  Meeting had taken place in the Mayors Parlour (see cutting)  Mcr Guardian Feb1/02.

The question of organising weavers was discussed.  Mr. Johnston reported that Mr. Wilkinson had been invited to meet the sub-Committee at their next meeting.

It was suggested that a circular should be drawn up asking for subscriptions which could be sent out to people likely to help.

Nb These minutes have two newspaper cuttings pasted in with reports on the AGM. 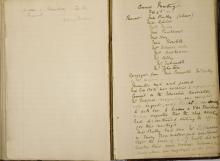 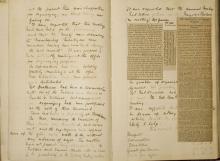