Reports were given of meetings held during March.

The Health Visitors having expressed their willingness to distribute literature,  it was decided to hold another meeting in Hulme.

The Council expressed their gratitude to the Federation of Women Workers for a donation of £10.

A letter was read from the Cooperative Wholesale Society re.  Tailoresses in which it was asserted that the Societies was in favour of Trade Unionism & that the  management had  victimised none of the employees. A resolution (proposed by Miss Ashton & seconded by Mrs. Ashwell Cooke) was passed  that Miss Bulley and the Secretaries should try to arrange a meeting at the works, at which one of the directors & Mr.Grierson should be asked to attend.

Miss Bulley said that she wished to resign the chairmanship of the Investigation sub-Committee and proposed that Miss Spencer, Miss Cox, Mrs Ashwell Cooke & Miss Crompton should form a provisional sub-Committee to discuss the  advisability of re- establishing the Investigation Committee & report the result of their discussion to the Council. 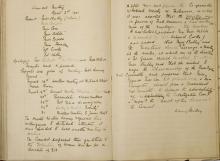