Arising out of the minutes Miss Cox gave a report of the proceedings of the Conference held by the Women’s War Interests Committee.

A letter was read from the Women’s War Interests Committee asking for delegates to attend a conference. Mr. Herford moved, Miss Bailey seconded and it was carried that Miss E. Cox, Mrs. J. J. Findlay and Miss Gardner be asked to attend.

Miss Cox reported that Miss Wallwork had been unable to leave Bolton at the beginning of the month, but that she had given all her spare time including three days holidays to the work of the office. It was resolved that Miss Wallwork’s engagement take place as from September 6th to include payment for the work done.

The Sub-Committee minutes were read. A meeting had been arranged for the women at Owen’s Leather Factory but none of the workers attended. Several leather factories had been visited during the dinner hours. Mr. Knapman and Mr. Yates of the Portmanteau Makers’ Union had met the Secretary and Chairman of the Council to discuss the possibility of getting women in the leather trade to join the Women’s Union. Mr. Yates undertook to get the women in Howarth’s to become members.

Several Tin Box Factories had been visited and a meeting had been arranged to take place at the Art Museum but was cancelled owing to the shops going on overtime.

The Sub-Committee suggested that a telephone would be a great advantage to the office. Miss Cox reported that it was very difficult to get a telephone installed owing to the war and suggested that the Workers’ Union through Mr. Geo. Fitt would allow an extension from their office. The Secretary was instructed to make enquiries.

The appeals to Trade Union and Cooperative Societies had been typed and duplicated by Miss Wallwork and sent out from the office.

Mr. Herford moved and Miss Ashcroft seconded and it was carried that Councillor G. Fitt be invited to become a member of the Council. 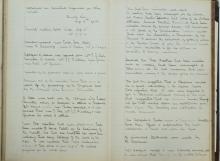 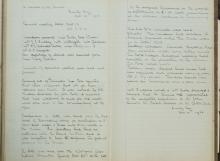