Apologies. Miss Ashton was detained and came in as the meeting ended.

Sheffield dispute. Mrs. Aldridge was detained at Sheffield by the lock-out at Messrs. Dewsnap.

Conciliation Bill. It was moved by Mr. Dale, seconded by Mr. H. V. Roe and carried unanimously that the following resolution be sent to the Prime Minister and the members for the Manchester and Salford.

Women’s Suffrage Letter to Prime Minister. “That the M.S.& D. W.T.U. Council representing many organised women of Manchester and Salford is of opinion that the immediate passage of the Women’s Suffrage Bill into law would be of great benefit to all working women, and urges the government to give it every facility during the autumn session.”

Mrs. Pickings Blouse Factory. A letter was read from an anonymous worker at Mrs. Pickings (blouse factory) to the Secretary stating that a few girls were on strike and inviting the assistance of the Council. Mrs. Aldridge had visited the place but found the dispute had been settled, and the girls wished to have nothing to do with the Council.

Sheffield Leather Workers. The lockout at Sheffield was still continuing, the girls standing perfectly steadily and firm. The firm had not been able to fill any of their places. Mrs. Aldridge’s report was read with great interest.

Alexandra Park Demonstration. It was reported that the Demonstration in favour of Trade unionism undertaken in conjunction with the M&S Men’s Trades Council, and the M & S Women’s Trades and Labour Council had been held on August 13th. The gathering had shown great interest in the question but the numbers present had been somewhat disappointing. 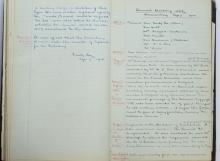 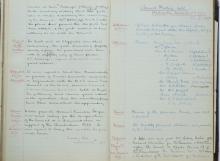