Minutes. Minutes of the last meeting read and confirmed.

Women’s Industrial Council and Guildhall Conference. A letter from the Women’s Industrial Council was read asking the Council to send delegates to a “National Conference on the unemployment of women dependent on their own earnings” to be held at the Guildhall on Tuesday, September 15th. Mrs. Findlay moved and Miss Bulley seconded “that Mrs. Aldridge be appointed to attend as representative of the Council.” It was also agreed to obtain tickets for other Council members who were able to be present.

Lily Goodband. The question as to possibility of securing work or financial assistance for Lily Goodband was discussed. Miss Ashton and Mrs. Findlay had made enquiries re-epileptic homes, the fees however for these were of a prohibitive nature. It was suggested that help might be obtained from the Charity Organization Society.

Cap Makers’ union. Mrs. Wermond (Cap Makers’ Union) was present for a short interview. She stated that according to the terms of settlement all the men and women affected by the strike and lockout were to resume work, 90% to be reinstated within the fortnight. Many of the firms however were openly giving preference to the non-unionists. Union members being told that if they tore up their cards and renounced the Union work would at once be found for them. The position of the Union was weakened by its exhausted funds. At the best many members would remain unemployed for some weeks and the Union had no money to meet the claims made upon it. Mrs. Wermond asked if the Council could do anything to secure sympathy and financial help for them.

After answering questions put by the Council Mrs Wermond left the meeting.

The organisation report showed that work had been carried on as usual amongst the Unions during the month. A Secretaries’ Tea had been held on September 2nd. It was well attended. Miss Cox and Mrs. Aldridge were present from the Council. The Secretary had arranged to see the manager of the Ordsall Rubber work re-dismissal of 3 girls who had acted as spokesmen for their department for an increase of prices for a special kind of work they were doing. 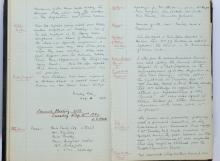 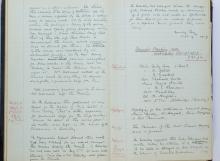