Confectioners. It was reported that Mr. Campion and Miss Quaile were attending a meeting for women confectioners for the Council at Eccles.

Mr. Ricketts. Mr. Ricketts of the Central Branch of Shop Assistants wrote resigning his membership of the Council owing to removal from the District.

Lancashire and Cheshire Textile Workers Representation. A letter was read from the Lancashire and Cheshire Women’s Textile and Other Workers’ Representation Committee asking the Council to be represented on a deputation to Sir Edward Grey on a date to be fixed towards end of October. Mr. Dale moved and Mrs. Cooke seconded that a representative be appointed. Carried unanimously. Miss Cox moved and Mrs. Cooke seconded that the Treasurer Mr. Herford be asked to be the representative. Carried unanimously.

The Minutes of the Organisation Sub-Committee were read.

The Sub-Committee proposed that a social evening should be held for the Bradford Flax Workers to maintain interest in the Union. Mr. Graeme Cox had kindly offered a room at the University Settlement Ancoats for the purpose. It was suggested that the Council should provide tea and biscuits. Mrs Findlay moved and Mrs. Cooke seconded that the proposal be agreed to. Carried unanimously.

Miss Emily Cox moved and Mrs. Ashwell Cooke seconded that the Union of Painters to Calico Printers Engravers and that the Women’s Section of the Amalgamated Union of Furnishing Trades be asked to send representatives to the Council. Carried unanimously. 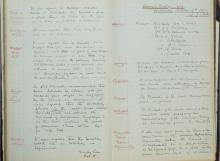