A circular from the Manchester Branch of the National Union of Women Workers was read which stated that their Annual Meeting would be held on October 14th at the Church House Deansgate.

Enquiry re-Women’s Labour Fabian Group.  A letter and circular from the Women’s Group of the Fabian Society asking for assistance in their “Inquiry as to what proportion of women and girls are working for the support of others beside themselves.” It was agreed to write for a supply of enquiry forms.

Mrs. Grierson. It was reported that Mr. G.V. Cox had suggested that Mrs. Grierson of the University Settlement Ancoats should be invited to join the Council. Mr. Herford moved and Mrs. Findlay seconded that the suggestion be accepted.

Painters Advance. The Painters to Calico Printers Engravers had received a shilling advance on the weekly wages in three firms by Messrs. Cunliffes, Martins and Todd. The question of an advance was under discussion in other firms.

Furnishing Trades Association. Successful meeting had been held for women in the furnishing trades and the union membership increased.

Sheffield Leather Workers. Thity-five women at Messrs. James Dewnap & co had received a shilling advance in their weekly wages & that the same amount was expected for another fourteen in the course of the week.

Sewing Machinists. Many meeting for sewing machinists had been held at various works in the dinner hours.

Secretaries’ Tea. A Secretaries’ tea held at the office on Oct 6 when representatives from the unions were present.

It was reported that Mrs. Aldridge recommenced her duties as Secretary on Monday Oct 6th. Miss Guffick finished her work for the Council on Tuesday Oct 7th and returned to her paid work at Messrs. J Blairs Co. 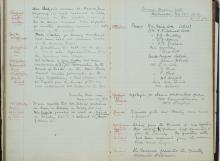