Arising out of the minutes, the chairman explained that she had not thought it necessary to proceed with the drawing up of the agreement to be signed by Miss MacArthur when she met the E.C. as on going through the correspondence she found that the points were contained in their last letter therein. This was endorsed by the Committee. Miss MacArthur was not able to visit Manchester as proposed.

The Treasurer gave a financial report and explained that he had received several letters from the landlord regarding the Anti-Vivisection Society’s rent. Mr. Graham, the Treasurer, had intimated that they preferred to pay half yearly, and Mr. Herford was in communication with the landlord asking if they would be willing to receive it in half yearly instalments.

The question of fixing a date for the Council meeting was discussed, and it was moved by Mrs. Withington, seconded by Mr. Dale and agreed that the first meeting be held in June, and that we endeavour to get Miss Tracey, H. M. Senior Factory Inspector, to give an address, and failing her Miss Newcomb or Miss Forbes to speak on social welfare work, or Mrs. Robinson on the position of women in industry. The day to the meeting was left with the Secretary to arrange with the speakers.

A discussion took place on the desirability of having a telephone fixed in the office, and on the motion of Miss Cox, seconded by Mr. Dale, the Secretary was instructed to get particulars with regard to this, and to see if the Ministry of Munitions could press the matter, so as to influence the Post Office.

It was decided to hold the jumble sale on Saturday, June 16 at the Hulme Settlement.

The Sub-Committee minutes were read. These showed that a strike was in progress in the Engineering trade, and in consequence of this, most of the women in the trade were locked out. The Secretary had been asked to visit a firm in Levenshulme with a view to organising the women.

A request had been received from women working at Birtle and Tate, to visit them concerning their wages. Twelve women were employed by the firm and 12/-a week seemed to be the highest wages paid. It was decided to recommend them to join the National Federation of Women Workers under the supervision of the E.C. as they were so few in numbers if the Federation agreed to this. It was reported that the organisation of women clerks was progressing very favourably. 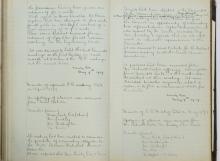 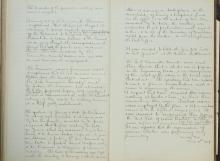