Meeting. The Minutes of the last meeting were read and passed.

Lady Swann. On the motion of Mrs. Ashwell Cooke seconded by Miss E. Todd it was resolved “that the Chairman be asked to write to Sir Charles Schwann to express the deep sense of loss with which the Council had heard of the death of Lady Swann, one of the founders of the Council, its appreciation of the splendid services which she had rendered through the twenty years of its existence, & to convey to him its sincere sympathy in his bereavement.”

Sub-Committee Minutes. Advertisements etc re-appointment of new Secretary. The Sub-Committee Minutes were read. At the Sub Committee letters were read of application for the temporary post of Organising Secretary. It was felt that further advertisement was necessary and the Committee recommended that advertisements be inserted in the Manchester Guardian and the Athenaeum. The Sub Committee also agreed that they with the addition of Mr. Herford as Treasurer and Mrs. Ashwell Cooke should meet on May 19 to consider applications and that a special meeting of the Council should be called to interview selected candidates on Tuesday, May 26th should the Sub-Committee have made a selection. Miss Cox moved and Mrs. Grierson seconded “that the recommendations of the Sub Committee be adopted.” Carried.

Time of next meeting. It was also agreed that the meeting be called for 5.30 pm if possible.

Wages of women in Government contracts shops. It was reported that Mrs. Aldridge had attended a meeting in London of the Investigation of the Women’s Industrial Council by invitation. The Committee proposed to approach the Government to induce them to fix a standard of payment for women employed in Government contract firms in districts where there was no trade union rate and where the current rates of the district varied. The fixing of such a standard would affect some of the cotton waste workers.

Painters Union. It was reported that the amalgamation of the Women Painters Society with the Engravers and Paper Stainers’ Union would take place as soon as the consent of the Registrar had been obtained for the alteration of certain rules.

Altrincham meetings. It was reported that the Altrincham Women’s Labour League had organised another trade union meeting - as Mrs. Aldridge couldn’t attend and many of the women were eligible for the Electrotype Workers Union Mrs. Dickenson was asked to attend. It was thought that the two Councils might conveniently work Altrincham together.

Bradford Flax Mill. It was reported that the manager of the Philips Park Rope and Iron Works had given an advance of six pence (unasked) to the rope and iron makers. 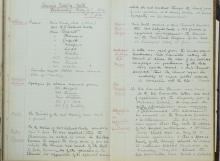 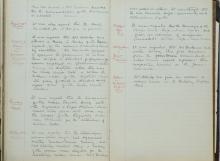