The Minutes of the Council meeting held on February 14th were read & signed.

The minutes of the Executive Committee were read.

The Treasurer reported that all bills had been paid.

Mrs.Schwann reported that she had received a donation towards the funds of the Council of £50 from Mr. J. P. Thomasson & £10.00 from Mr Herbert Phillips.

Resolved that five form a Quorum for meetings of the Executive.

-that a core of rules be drawn up by the Executive, in accordance with outline scheme passed at Council meeting on the 14th of February and submitted to the Council-

After some discussion, as to the power of the Executive to form committees- the 9th resolution passed on the 14th was read viz-

Mrs. Arnold, Mr. Forrest and Mr. Mosses gave an account of the steps taken by the Executive Committee, which regards to the appointment of Organising Secretaries & explained that none of the candidates had all the qualifications required. Mr. F Brocklehurst proposed, and of the Rev. Bernard Vaughan seconded, that the action of the Executive Committee as to the appointment of organisers be confirmed – carried with one dissention. (The appointment to date for April 22nd for Mrs. Ashwell at a salary of £70 – that of Miss Welsh from April 29th at a salary of £50 per annum - one month’s notice to be given on either side.)

Miss Ashwell & Miss Welsh having been introduced, a discussion followed as to the Trades to be investigated first.

It was resolved that the following trades shown to be taken up with regard to the conditions of work, wages, hours, state of the existing law and existing organisations.

Mrs. Schwann reported that the Upholsterers desired to be represented on the Council- in accordance with resol:6 - Feb.14th 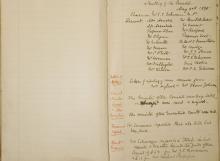 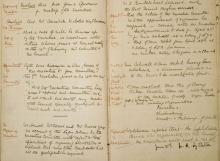