Minutes of Council Sub-Committee. Minutes of previous meeting read & passed. Miss Cox reported there were no Sub-Committee Minutes as the usual meeting had not been held.

Mrs. Swanwick & Organisation of Domestic Servants. Mrs. H. M. Swanwick met the Council for the purpose of placing her views re-organisation of domestic labour before the members. Mrs. Swanwick had no definite scheme to propose but urged that a useful start might be made along the lines of better training & organisation of out workers or day girls. With efficient organisation a better type of “day girl” might be induced to enter domestic service. The discussion was quite important & no resolution taken or decision arrived at beyond asking Mrs. Swanwick to report again to the Council at any time she thought proper to do so.

“Sweated” Goods Exhibition. The Secretary reported that the Council had the first refusal of the “Sweated Goods exhibition” for the month of October in Manchester. That the “Daily News” would be willing to lend all the “exhibits & stalls, lantern slides etc” free of charge. Cost of carriage & all local expenses of hall etc would need to be met by the Council.

Next meeting. Miss Ashton moved Mrs. Cooke seconded that the next Council meeting be held on Wednesday, May 30. 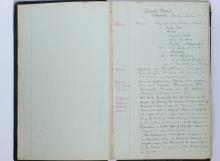 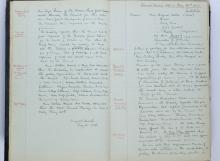