Chairman elected. On the motion of Councillor Johnston and Mrs. Findlay Miss Emily Cox was elected Chairman of the Council for the ensuing year.

Finance. In the absence of the Treasurer the month’s financial statement was presented by the Secretary.

Sub-Committee minutes. Labour Exchange. The Minutes of the Organisation Sub-Committee were read. These showed that Mrs. Aldridge had seen Mr. Williams the Divisional Officer for the Labour Exchange re representation on the proposed Advisory Committee. Mr. Williams said that the first committee to be formed would be composed of men & concern itself with men’s trades only and that later committees would be formed for the women’s and children’s trades. It was pointed out to Mr. Williams that it would be difficult to find trades in which men only were employed and that women should be represented on the first committee, especially as the committee will take the principal trades first i.e. the cotton trade. Mr. Williams promised to submit the point to the Board of Trade.

Homeworkers. A meeting of homeworkers was held at the office at which 25 were present and seven new members added to the association.

Box Makers. Clothiers. Midwives. Several box makers meetings had been attended by Mrs. Aldridge in Manchester and Stockport – also many dinner hour meetings for the Clothiers Operatives’ Union and a meeting of midwives in London.

Clothiers and Box Makers representation on the Council. As much work had been done in connection with the box makers and clothiers’ operatives it was agreed to send an invitation to both Unions to be represented on the Council with a view of bringing women’s trade unions in closer touch with each other.

Evening Meetings. It was resolved that as many Unions found it difficult to appoint representatives to afternoon meetings that every third meeting be held in the evening. The next meeting to be on April 13th at 7 o’clock. 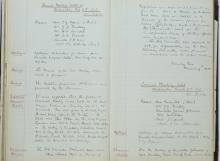 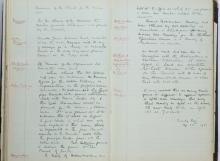