Minutes. The minutes of the meetings held on January 12 and 26 were read and passed.

Reports arising out of Minutes. Arising out of the minutes Miss Emily Cox gave a report of the conference held by the Women’s War Interest Committee held on February 5th.

Election of Chairman. Mr. H. V. Herford moved Mrs. Withington seconded and carried that Miss Emily Cox act as Chairman of the Council for the year 1916.

Election of Sub-Committee. Miss Cox moved and Mr. Herford seconded and carried that the present members of the Committee be elected with the addition of Mrs. Withington.

Landlord and A. V. Society. Miss Cox reported that the landlord had objected to the A. V Society becoming sub-tenants without permission and had asked for the plate to be removed from the door. Mr. H.V. Herford volunteered to interview the manager (Mr. Heape).

Professor Tout. Several letters were read from Professor Tout objecting to the Council identifying itself with that No Compulsion Committee and the Women’s International League. Moved by Mrs. Withington seconded by Miss Gardner and carried that Miss E Cox and Mr. H. V. Herford write a letter to Professor Tout.

Conditions of Child Life in War Time Conference. A letter was read asking the Council to send delegates to a conference to be held to consider the Conditions of Child Life in Wartime. Moved by Miss Gardiner seconded by Mrs. Withington and carried that as the matter was not closely enough allied to the work of the Council delegates should not be sent.

Sub-Committee Minutes. The Sub-Committee minutes were read. The Secretary had attended a meeting of Blair’s girls with Mr. Conley and Mr. Watson ( Clothiers Union) re- amalgamation. A meeting had been held in the Clarion café at which Mrs. Aldridge had spoken on her experiences in Serbia.

A meeting of Women Confectioners had been called by the Bakers’ Union. The amalgamation had taken place and Miss Redford and Miss Ashcroft appointed as the officials. The Secretary had spoken to a meeting of postwomen called by the Postmen’s Federation. Several interviews had taken place with Mr. Knapman (Portmanteau Makers) on the question of amalgamation with the Fancy Leather Workers (women). 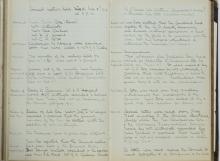 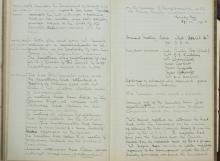