A special meeting of the Executive was held on Monday, March 24th at 3.00 pm

The Secretary reported that the Trades Council had decided to take over the work of the WTUC as soon as the “winding up” had taken place. They were prepared to give the scheme a trial for nine months and Mr. Mellor asked the Secretary to call a meeting of all the women’s organisations, to discuss the question of affiliation fees and representation at the Trades Council meetings.

The Annual Report, with a short history of the Council, was read, and alterations were made.

It was reported that the Annual Meeting would take place in the Lord Mayor’s Parlour on April 8, the speakers proposed were, Mr. C.P. Scott, Mr. Purcell with Sir Charles Schwann in the chair, Mrs Cooke, Miss Cox, and other members of the Council.

It was decided to hold a Secretaries Tea on April 7th as a farewell gathering to the Secretaries, and Miss Cox wished to bring before them the question of a small emergency fund which she had in hand for the Joint Committee of the Women’s Trade Unions. 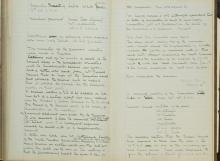 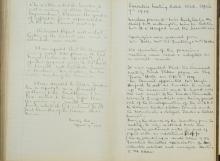