Sub-Committee Minutes. Addresses given by Secretary.The Sub-Committee Minutes were read. These showed that visiting had been done amongst homeworkers, women in the furnishing trades. The diary showed that addresses on the benefits of organisation has been given by Mrs. Aldridge at the Marple Suffrage Society and at the Preston and District Conference of the Association of Teachers of Domestic Science on February 15th. She had also taken part in the War Against Poverty Conference held at Blackburn on February 22nd.

Manchester University. It was reported that an exhibition of sweated articles had been arranged by the Council on Mrs. Findlay’s suggestion in the Reading Room of the Manchester University to precede the address on the Trade Boards Act by Mr. Mallon on February 27th. Professor and Mrs. J. J. Findlay had sent out special invitations to members of the university.

Secretary’s leave of absence granted.  A request from the Secretary for leave of absence from about Whitsuntide till the end of September was considered and the following resolution moved by Miss Cox and seconded by Miss Guffick was unanimously carried:- “That the Council having heard with regret that Mrs. Aldridge finds it necessary to be away from Manchester during the summer months grant the leave of absence desired. They warmly appreciate her devoted services and trust that her health may be completely restored by the rest and change.” Councillor Marr moved and Mr. Dale seconded “That the Chairman be requested to report at the next meeting as to arrangements for Mrs. Aldridge’s leave of absence.” Carried unanimously. 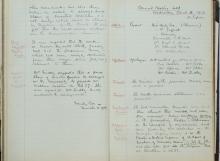 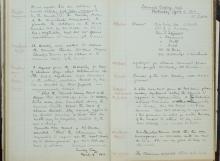