Finance. Financial statement for the month was presented by the Treasurer.

Drawing Room Meetings. Mrs. Findlay reported being unsuccessful in her efforts to arrange a drawing room meeting on behalf of the Council's funds. Names of other ladies were suggested by the Council and Mrs. Findlay promised if possible to write to them.

Combined Committee of the 3 Manchester Councils. It was reported that the Joint Committee consisting of representatives from the three Manchester Trades Councils was formed on May 18th at a meeting held at the Caxton Hall. The Committee decided to increase the representation from 3 to 4 members from each of the Councils. A Sub Committee of one from each Council, Councillor A. A. Purcell, Mrs. Dickenson and Mrs Aldridge, was appointed to draft and issue a circular to all the trade organisations in the Manchester District with a view to ascertaining to what extent the existing Unions included women members and where the most useful assistance in organisation work could be rendered. (See copy of Circular on scanned page).

Leather Workers. Miss Ashton moved and Mrs. Findlay seconded that Miss L. Stapleton, Secretary of the Women’s Society of Fancy Leather Workers be appointed as the additional representative on the Joint Committee.

It was reported that the next meeting was arranged for Tuesday, July 6th at the Caxton Hall.

Christian Conference. It was reported that the Council representatives attended the Christian Conference at the Memorial Hall on May 26. The meeting representing the social reform societies of the district had voted against the proposal for a central committee.

Women’s Trade Union League. A letter was read from Miss MacArthur, Secretary of the Women’s Trade Union League, asking permission to attend and lay proposals re-National Federation of Women Workers before the next meeting of the Council. It was moved by Miss Ashton and seconded by Mr. Herford that Miss MacArthur be asked to attend the Council meeting on July 14th or failing that date to come on July 7th when a special meeting of members could be arranged. 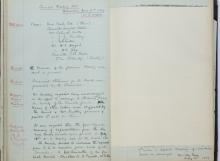 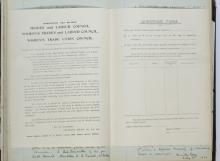 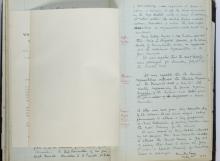