Finance. A financial statement was made by the Treasurer.

Sir Charles Swann.The Chairman read extracts from a letter received from Sir Charles Swann, thanking the Council for its kind expression of sympathy in his sad bereavement.

Jumble sale. The Chairman reported that up-to-date the proceeds of the jumble sale was £16-8-0.

Scottish Midwives Bill. It was reported that Mrs. Aldridge with the Secretary of the National Association of Midwives and a Scottish representative had attended a meeting in London to interview the Scottish minister re-the Scottish Bill for the registration and supervision of midwives in Scotland.

Tresco Rubber Co. It was reported that a difficulty had arisen at the the Tresco Rubber Works through the management’s stopping 10 girls at a minutes notice when the custom of the works being to have a week’s notice. When complaint was made the firm answered that the girls were only suspended during slack time. Further information was to be obtained.

Ward’s Strike. It was reported that a strike had occurred in Ward’s Underclothing Factory through a line of work being paid at 2/4 instead of 2/9. After negotiations Mr. Ward promised to give the higher amount if the work did not pay at 2/4. Five girls were dismissed and after deputations to the firm four were reinstated, the fifth declaring she did not want to go back. Miss Perrins, shop steward in the Norwood, has got a place for her at the Norwood and proposed to teach her blouse making.

Home workers. It was reported that a Home Workers meeting had been organised for July 6, several women attended, and one new member was made who reported that she had refused handkerchiefs from the Central Hemming Company with four sides to be hemmed at 5d per gross (a net price when cotton was deducted of 31/2 per gross) and many other women had done the same.

Miss Quaile’s Re-election on GFTU Board. It was reported that Miss Quaile was re-elected on the Executive Board of the General Federation of Trades Unions (Insurance Section) for the coming three years.

August Meeting. It was moved by Mr. Herford, seconded by Mrs. Findlay that there be no August meeting unless some emergency arose. 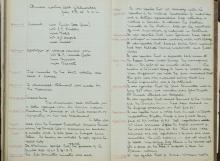 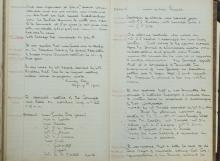