Apologies for Absence. Submitted apologies for absence from Miss Gaskell and Mrs. Bennett.

Mr. Robinson. A letter was read from Mr. Richard Robinson thanking the Council for their invitation and regretting that pressure of business rendered it impossible for him to join the Council.

Finance. The Treasurer presented financial statement for the month.

Attempted Reduction of prices at Blair’s Corset Factory. It was reported that an attempt had been made to reduce the prices at Blair’s Corset works, the trimmers, steelers, enders and binders in no.6 room. The reduction, a farthing on every 2 dozen made, would have affected wages of 24 girls from 9-1/4 per week. The girls protested against the reduction and six of them (trimmers) at once got the old price back. These were members of the union. The other 18 remained firm in refusing to accept reduction (of these one only was Union member the others joining on day reduction was proposed) and after two days were successful in getting their old prices back and the reduction was entirely prevented. Three girls however, who had taken the lead in the matter were discharged. Efforts were made by the WTUC to get them reinstated but without success. One of the girls would receive financial help from the Union have been a member since its formation. A collection amounting to 12/- had been made at the works for the dismissed girls. The Council felt that as the girls had been dismissed because of the lead taken by them in preventing the reduction help should be given them from the Emergency Fund.

Two girls victimised at Blair’s. Mr. Herford moved and Miss Ashton seconded that the sum of 6/-per week be paid to the two girls, who would not receive help from the Union, until the next Council meeting if necessary. Also resolved to make an appeal on behalf of the girls to bring the amount nearer to the 11/-per week they would be earning if in work.

Union Meetings. The business meetings of the Unions had been held as usual during the month. Special efforts were being made to extend organisation amongst corset makers and sewing machinists and factories were being visited each day as the workers left and leaflets etc. distributed. 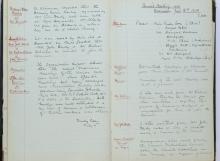 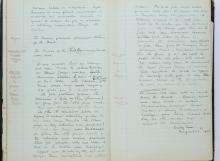