An apology of absence was received from Mrs. Ashwell Cooke.

Arising out of the minutes, it was reported that a reply had been received from Mr. Mellor stating that the Manchester Trades Council had nothing to do with the arrangements for the Conference between employers and employed.

Trades union propaganda meeting. It was reported that the Council and the Women’s Trade and Labour Council had been asked to provide stewards for the meeting, and that only the Unions taking part would be allowed to distribute literature inside the hall. It was moved by Miss Cox, seconded by Miss Ashton and agreed that the Council have a special leaflet printed for distribution, giving the names of the various Unions affiliated to the Council.

Correspondence. A letter was read from Mr. Charles Renold asking for an interview with Miss Cox and Miss Quaile, and it was decided that this should be arranged at once. It was also decided that a small Committee be appointed to go into the question of the new orders issued by the Ministry of Munitions, governing munitions workers.

The Sub-Committee minutes were read. These showed that many meetings had been held in connection with the Tin Box and Woodworking trades. It was also reported that the organisation of munition workers was progressing very favourably. 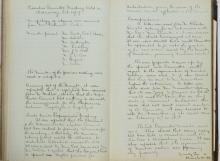