Matters arising out of the minutes:-a reply had been received from Miss MacArthur about the branches of the Federation under the supervision of the WTUC:-the winding up of the Levenshulme Branch was well in hand and the chairman had written saying that the Burnage Branch would be dealt with, as soon as some decision was arrived at about the Council’s amalgamation with the Trades and Labour Council. This letter was endorsed.

Trades Council Amalgamation. Mr. Mellor had asked that we should find out how many women’s organisations would affiliate to the proposed group and to make a report to be considered by his Executive on February 12. The organising sub-Committee instructed the Secretary on February 7th to undertake the work and visits were made to the clothiers union, shippers clerks, engravers, confectioners, dockers, midwives, National Federation of Women Workers (Burnage) and the John Dalton Street Unions, covering a membership estimated at 10,000. A full report was drawn up and sent to Mr. Mellor. The promises had been fairly satisfactory.

To enable the Secretary to do this special work in so short a time, it was decided at the Organising Sub-Committee to ask Mrs. Major to look after the office during the week, a payment of £1.00 being made. Hours to be not more than four per day.

Miss Ashcroft moved Mr. Herford seconded that the action of the Sub-Committee be endorsed. This was carried.

It was decided that a special meeting of the Executive be called, if necessary, after the Trades Council discussion had taken place.

Domestic workers:-the Secretary reported that enquiries were being received at the office about the organisation of Domestic Workers. It was agreed that a special Sub-Committee be formed to deal with the matter.

The sub-Committee minutes were read. Wood workers:-two general meetings had been held. A deputation to the Carpenters and Joiners had been arranged to discuss the question of employment of women on woodwork.

40 new members had been made at Hans Reynolds for the Burnage branch N.F.W.W.

A meeting of the Crossley collectors had taken place and all monies in hand were paid into the Branch funds.

Sheffield Leather Workers. A very successful social had been held 300 people were present. Miss Wallwork had gone over by invitation. Miss Quaile was unable to be present. The question of the wages paid to three stitchers at Messrs. Dewsnaps has not yet been settled.

A further request for an increase had been sent in to Messrs.Hawksleys for the flask stitchers employed by them. Mrs. Grundy had asked for help in organising among the Winders in this district. The Sub Committee considered that help could not be given at present. 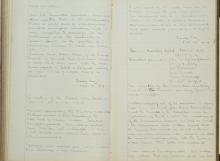 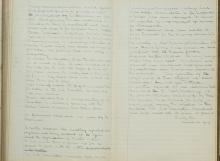