Finance. The Financial Statement for the month was presented by the Secretary in absence of the Treasurer.

Manchester Royal Infirmary and Medical Women. Councillor Johnston moved and Councillor Purcell seconded “that the Women’s Trades Union Council desires to express to the committee of the Manchester Royal Infirmary its strong conviction that qualified medical women should have the same opportunities as men of being appointed members of the Infirmary Medical staff since they have been subjected to the same conditions as men in obtaining their degree.” The Secretary was instructed to forward a copy of the resolution to the Infirmary Committee.

Organisation. Confectioners Meeting These showed that organisation work was proposed amongst umbrella makers and finishers, that it was also proposed to hold a meeting for confectioners at the Amalgamated Bakers and Confectioners’ Club for the purpose of increasing membership and influence of the Women’s Society. A meeting organised by the Kindred Trades Federation in the shipping industry to extend organisation amongst the women in the trade had been addressed by Mrs. Aldridge. 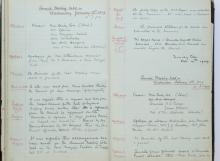