Mr. Herford read the financial statement for the month and gave a rough estimate of receipts & expenses up to the end of the year. The receipts-if all subscriptions should be paid up-he put at about £203, the expenses at about £200. Apart from the deficit of over £47 it seemed therefore that the working expenses of the year would be covered by subscriptions, donations, & grants & rents from societies. The deficit on the salary of the Tailoresses Secretary, of £3 had been wiped off. It was suggested that the following lady & gentlemen might perhaps be asked to fill vacancies on the council. Mrs. Chapman, Canon Cremer, Rev. Dale, Mr.Ensor. The organising sub-Committee with the chairman Miss Bulley, were asked to arrange for the annual meeting, which it was thought ought to take place at the end of January or at the beginning of February. Mrs. Tenant, Mrs. Lyttleton, Mr. Sweeney, Mrs. Bury Mrs S. Davies, Miss I. Ford, Mr. Shackleton the Bishop of Hereford, were suggested as speakers.

The meeting having been called specially to consider finance, the secretaries were absent from the discussion. 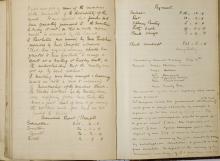 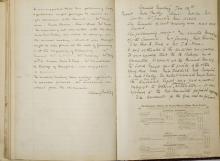