Correspondence. National Federation of Women Workers. A letter was read from Miss MacArthur of the National Federation of Women Workers asking the Council to appoint a delegate for a meeting to be held on Tuesday, September 2nd in the Association Hall, Mount St. during Trades Union Congress Week, as the Federation was most anxious to have the local movement represented. Mr. Herford moved and Mr. Dale seconded that Councillor James Johnston be asked to represent the Council.

Painters. Reported that the strike of the Calico Printers and Engravers was at an end. The terms were not yet known. 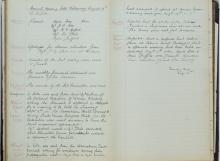