Correspondence. Mrs. Bennett’s Resignation. A letter was read from Mrs. Bennett resigning her membership on the Organisation Sub-Committee. Her resignation was accepted with regret.

Lady Schwann re-Scottish Industries. A letter was read from Lady Schwann suggesting that through the courtesy of the promoters, an effort might be made to get permission for holding a stall of the work of unemployed women or home workers, at the Scottish Home Industries Exhibition to be held in Manchester on October 18th and 19th. Mr. Herford moved and Mrs. Eddie seconded that the Secretary write to Lady Schwann and subject to the approval of Miss Cox try to arrange for such a stall.

Women’s Trade Union League. A letter was read from Miss MacArthur thanking the Council for their willingness to receive her at the October meeting but doubting her ability to be present.

Organisation Sub-Committee. Formation of the Typists and Shorthand Writers Association. The minutes of the Organisation Sub Committee were read. These showed that at a meeting of typists and shorthand writers held on July 15th and addressed by Mrs Aldridge and Miss Moore a unanimous vote was taken in favour of the formation of an Association. About 30 girls were interested. A Provisional Committee was appointed with Miss Dorothy Darlington as Secretary. It was decided to hold a serious of public meetings early in October. The Committee was discussing in detail the constitution of the London Association whether the new association would be a Branch of the London body was left over for discussion at a later meeting.

Amalgamated Society India Rubber Workers. Mrs. Aldridge had also for the same purpose met the Executive of the Amalgamated Society of India Rubber Workers on Saturday July 24th at the Bull’s Head Inn, Union Street. It was resolved that the small organising committee recently appointed by the Society should whenever possible work jointly with the Council in furthering the women’s organisation.

Home Workers. Mrs. Aldridge had also spoken at a meeting of home workers called by the Manchester Anti Sweating League at the Ancoats Settlement. 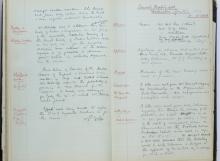 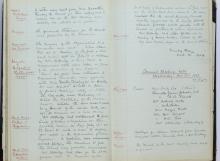