Finance. The Treasurer reported on the year’s finance.

Midwives and CMB charges. Mrs. Lawson gave report of the case defended by her Association at the Central Midwives Board Meeting on Saturday, December 21st. There were three charges against the midwife made by the Local Supervisory Committee. None of the charges were proved. 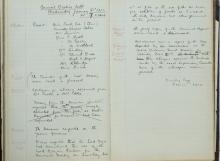