Letter from the Manchester, Salford & District Education Association asking the Council to appoint their representatives for the current year.  Mr. Herford moved & Miss Emily Cox seconded that Miss Margaret Ashton be appointed to represent the Council.

Letter of thanks from Mr. Davis.  Mr. Davis, General Secretary Fancy Leather Workers’ Society, wrote thanking the Council for their action in organising the women leather workers in Manchester.

Carpenters & Joiners Society.  The Carpenters & Joiners Society applied for use of office for an hour each morning & one evening during the week.  It was agreed that the Society could have use of office on Friday evening & each morning for rent of £10 per year, to be paid monthly & in terminating tenancy one month’s notice to be given on either side.  Mrs Aldridge was instructed to write.

Fancy Leather Workers Society.  The “Fancy Leather Workers Society” covered the workers in Gladstone Bag & Pocket Book trade which was a small skilled industry in the district.  The Union, in Manchester, could never be large but one in which it was possible to organise all the women & girls employed & and where much valuable work could be done.  Miss Jessie Forsyth had been appointed Secretary.  The organisation had been undertaken at the request of the Men’s Society.  Mr. Fisher & members of his committee had given much valuable assistance.  Encouraged by success in Manchester an effort was being made by the Men’s  Society to organise the women in London, Sheffield & Glasgow.

Women Confectioners' Society.  The Confectioners' Union had commenced on a smaller scale mainly owing to the difficulty of getting in touch with the women.  The meeting for purpose of forming the union had been called jointly by the Women’s Council & the Bakers’ and Confectioners’ Union.  Miss Johnson had undertaken post of Secretary & regular meetings were being held.

Finance.  The monthly financial statement was reported on by the Treasurer.  Several donations & new subscriptions had been secured as result of the appeal.

Appeal to Trade Unions.  The advisability of appealing to the Trades Unions, in the Districts, for funds was then discussed & it was agreed to leave the matter to the Organisation sub-Committee.

Mrs. Aldridge’s appointment.  Mrs. Aldridge’s appointment as Secretary to the Council was next considered.  The members expressed themselves as thoroughly satisfied with the efficient way in which the work of the Council had been reorganised during her six months tenure of office.  It was resolved in the absence of the Chairman & several other members to postpone the matter of renewing the appointment until the July meeting.   Mrs. Aldridge was asked to continue the work during the month of June.  She agreed to this arrangement. 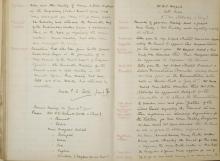